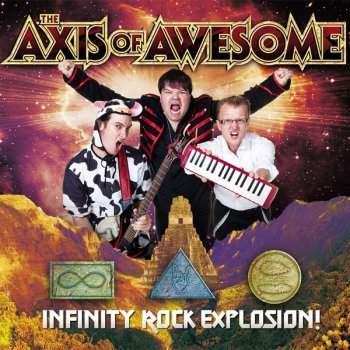 The Axis of Awesome

No translations available
+Add Translation
We detected some issues
If you found mistakes, please help us by correcting them.
Lyrics for The Glorious Epic of Three Men who are Awesome by The Axis of Awesome

Through the mist of smoke and flame Rides a man, a mighty lord His foes fall in pain

Women cry his name The gift of rock his reward With a voice that can power lightbulbs Wound a bear and shatter souls He calms the hounds of Hades All the single ladies Put your hands up Rock 'n Roll Under rock and craggy mountain In the ancient hall he dwells His piano shines with glory He sings an ancient story Of betrayal by the Elves Wait, sorry. Ancient halls? Elves? You're making me a dwarf, aren't you? No, no. You are a mighty warrior His six brothers, grim and beardy They saw a maid, as white as snow A magic mirror found her Now she's off, they flounder Hi-ho, hi-ho, it's off to work he goes Ah, thanks. I'm a dwarf then, a Disney dwarf Yes, yes! A mighty, mighty dwarf! Man of earth and man of fire Battle brothers to the core Valor soaring ever higher But we're empty, lost without one more Hello, my name is Lee And I play the guitar And I play the guitar! What? And so we ride onwards to destiny Our foes and enemies slain Fighting fierce beasts, eating their meats We ride! And Awesome's our name Jordon! Riding on a skeleton horse of fire! Lee! Riding on a skeleton horse of fire! But no, I'm riding a skeleton horse of fire Ya, you have to pick something different Lee! Riding on a skeleton horse of... water! What? A waterhorse? You mean like a seahorse? Well, at least I'm not riding on a chicken! Who said I'm riding on a chicken? Benny! Riding on a chicken! But why do I have to ride a chicken? You guys got to choose yours! I want to ride a dragon! And so we ride onwards to destiny On horse, seahorse, and hen Evil destroyed, homeless employed We ride! From now till the end And in the misty halls of Asgard Where the Gods watch over man They tried to curse the Axis for our pride But alas, we were too awesome Their powers weak against our might So we kicked them in the balls And then they cried And so we ride onwards to destiny With swords and weapons and shit Lightning will flash Thunder will clash We ride into infinity! We fly and don't need a plane We'll fill you with love Till heaven and earth combine! And Awesome's our name