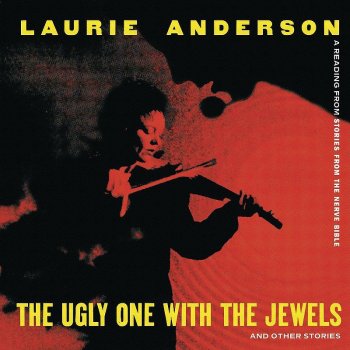 No translations available
+Add Translation
These lyrics are waiting for review
If you found mistakes, please help us by correcting them.
Lyrics for The Salesman by Laurie Anderson

Adding up to a kind of self-portrait Although not a very naturalistic one. And I used the word Bible in the title of this book Because the first really strange stories I remember hearing Were Bible stories. And these stories were completely amazing: About parting oceans, and talking snakes. And people really seemed to believe these stories. And I'm talking about adults. Adults, who mainly just did the most mundane things imaginable: Mowing their lawns and throwing potluck parties; They all believed in these wild stories. And they would sit around and discuss them In the most matter-of-fact way. So, in a way I was introduced to a special local form of surrealism at an early age And so there was always a question in my mind About what's actually true And what is just another art form. Now I've always been interested In trying to define what makes up the late twentieth century American For example and so, as an artist, I've always thought my main job was to be a spy, To use my eyes and ears, And find some of the answers. For example, I like to hang around the banks of phones in airports, One of my favorite listening posts And eavesdrop on conversations. Now I usually travel on the same schedule as salesmen And after lunch these guys call into the main office And I just stand there at the phones, listening in And taking notes for my portrait of the American salesmen. {Oh Frank? Listen, Frank. You know, I hate to say this about Brad. I mean we both know he's got a heck of a job. Ya, ya. Oh you're so right. But you know, we both know that Brad just isn't pulling his weight. You know what I mean? And I'm not saying this just because we're both up for the same Safeway account.} So this book is really a collection of voices and stories As well as portraits of people that I've met along the way.

The Ugly One With the Jewels and Other Stories