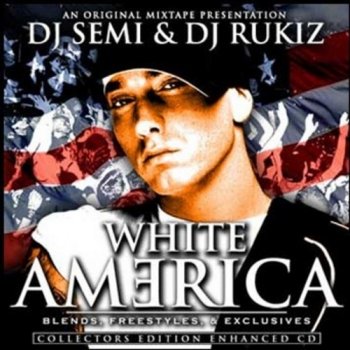 No translations available
+Add Translation
We detected some issues
If you found mistakes, please help us by correcting them.
Lyrics for The Anthem (Rukiz Blend) by Eminem

-RZA intro from "Airwaves"- (King Tech) One two, one two

We dedicate this one to the hip-hop culture y'all Brought to you by the WOOOORRRLLLD FAMOUS Wake-Up Show! (RZA) Bobby Steels, Staple' tails, MC's get your lips stapled Project Killa Hill is stamped on the map like the compass Sacred sword play tongue-twist, piercin holes in you You can't escape, 70, 000 kilowatts blast through your box Woke wit alarm clocks, cars drivin slow down the block One stopped, parks pops his truA FANCY A SHAG WEE BURNERS (Tech N9NE) When I Woke-Up, I got the mic and never chocked up Busted a verse and all the G's in Cali loc'ed up when I was summoned Styles were mixed like the Drummonds, Killer Clown is comin Look around, your town is crumblin This Big Tech from the midwest, leavin MC's lipless On The Wake-Up Show, make up no, stories about my shake-up flow Put me off in a cipher? Potna, you can't fuck wit the sniper Your flow's premature, clean your dirt diaper Mic heister, psycho, alpha-schizo Hypno, chryo-gat flow, guru and ain't nobody tighter Sway & Tech heard me flow and its sealed Now I got Swedish women yelling "Tech N9NE's filled" (Eminem) This place is my house, I might as well erase my face wit white-out Cuz y'all can't see me like Mase's eyebrows (where you at?) Climped out of a nice house, Through the front window and heard this guy shout "Hey that's my couch, bitch!" Pull a nine out during a rhyme bout While I'm rippin this shit, put a clip in it spit five rounds And murder you hoes worse than flippin a convertible Nose first wit the top off landin upside-down You're tied down and duct-taped, fuck rape I'd rather just hump a slut's leg wit my nuts shaved And Sway & Tech, two disk jokeys Breakin so many friggin needles I wonder if they inject (Xzibit) Lo and behold, better than platinum or gold Yes God bless success, never forsake your soul Xzibit take control, locked loaded and ready to roll Play the upper hand, a man that's never gon' fold Cuz your tape sucks, find a new hobby that you can take up Or listen to my niggas Tech & Sway so you can Wake-Up The X-man, catch me doin drills in the Danger Room Big game hunting, from high-noon to the full moon (Pharoahe Monch) Wit synonyms, I get an adrenaline rush From minimum thrusts, bust multiple assualts in small interims As horrid as Borris Kolaf was When I cut your neck, leave a little piece of flesh So the head won't fall off, hauled-off Sawed-off shotgun blast, he asked Why did he have to die like cast metal? O, huh, C now like Omar Credle We pone pedal at a high resolution On the Wake-Up Show wit Sway, Tech and DJ Revolution *DJ Revolution scratches* (Kool G Rap) I sway the tech wit the Tech and Sway Step away, wet and spray, rep the day Who over debt to pay get swept away Across the whole board like checker play When I blaze your whole sect' arrays Wake-Up Show for those slept away Niggas that the trey, hit the deck and pray DJ Revolution, spinnin like lead from out the heck-AK Tearin your neck away, flood up the street wit bloody decora' Until the head of jake investigate (Jayo Felony) What? Sway can give it to you, but Whatcha Gon' Do wit it Tech can give it to you, but Whatcha Gon' Do? Rev can give it to you, but Whatcha Gon' Do wit it I can give it to you, Wha Wha Wha What What! (Chino XL) Yo yo Chino makes the world go 'round Fuckin up entire record companies like Harrel did to Motown Vominous talk, poison pen, hominous walk What flow will I destroy wit this time, the most commonest thought The drama that's brought, caught us in a midst of sibling rivalry For instance, there's nothing in existence that can survive wit me Clone me like sheep, I clean house like Tony Rand-all Wit style filed for sexual harrassment like Tisha Camp-bell You're wack like Will Smith, your rhyme style is pansy I fuckin murder your young style like JonBenet Ramsey Now who the master to beg? Your demo gets passed on the reg' You shouldn't have been signed if you had a white cast on your leg I'm Wake-Up Show reppin wit Sway & Tech My tec's like Tekken, the industry weapon I'm Chino X, bring KRS in (KRS-One) De de de de de de da di day, KRS-One comin wit the Tech & Sway Yo, I rock up the littlest set, and on the biggest set As ill as it gets I still manage to wiggle your neck wit sweat Never forget, the bigger the budget the bigger the debt You gotta be willin to rock in the middle of dry and in the middle of wet But I'm willin to bet, on a Sway & a Tech They stay in effect, never been a pain in the neck, they gainin respect Nevertheless I WRECK YOU, now you know what Sway & Tech do I'll be back but for now just sackle! FRESH, FOR NINETY-NINE YOU SUCKAS!