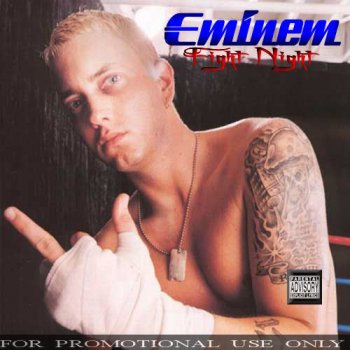 Once again it's the sinister, cynical, minister Shady Kryptonite to Superman, he's a dentist to Amy Administer of the pain, just finished, huffing the paint

And muffled the fumes like it was nothing because it ain't Anything in his way, his enemies he just slays His venom he spray, reaches like beams of energy rays Menacing stares, he glares makin' the hairs all on the back of your neck stand Like Dracula yep Spectacular rep, he's a tarantula, gargantuan Yah, Angela so I command you to start dancing Part Manson, part Hannibal, part mechanical shark Throwing animal parts at Scarlett Johansen Enter my gas chamber, ya gangsta, my ass He's got his fangs to your neck, he's set to strangle ya ass, hater You're facing a task greater, he's chasing your ass He's got his face in a mask, your blood stains on his glass table I'm checking the exposure, a full dose of me Exposing myself locked inside of a cozy hotel posing With or without clothing, next to the decomposing Bodies eroding while I'm dozing off overdosing Windows opening-shutting, doors opening-closing I think there's a ghost Too much hydrocodone and Codeine I was only supposed to swallow a half I took the whole thing I'm not joking, I think I just snorted my nose ring I need a drink, I'm standing over the sink posing Myself, self-loathing, cause I'm on a brink, mostly I don't wanna think this will make everything rosey Beverly sings, scream while I'm severing three toesies Totally frozen while I close in, I'm yodelling Rosey, won't you come out to play A nuisance, wasting time, cutting and pasting headlines in the papers Making shrines of my crimes and capers My words are whirlwinds, I murder my girlfriends Go to Europe and put neurofens in my syrup and stirred em You never heard him like this, so don't encourage him The neurosurgeon, coke mirrors, I'm lyrics worse than The kinda person to get Katie Couric to cursin' Eighty spirits of ladies cause Shady murdered the virgins Crazy turn of events that he emerged, took over the world And reeled in all the children, lured em into the building and killed em Buried em in the mulch and mildew and he will do what he feels And still can spit, drawn to gold like Rumpelstiltskin Cotton to silk, Motrin to Tylenol - three pills The Real Slim Shady's entered the building There's nothing but crumbled leaves and Tumbleweeds up in this bitch, Mildrid He's ill wit it, he still shouldn't be heeled There's no one as sick as he MC's Will get fricasseed on the grill then