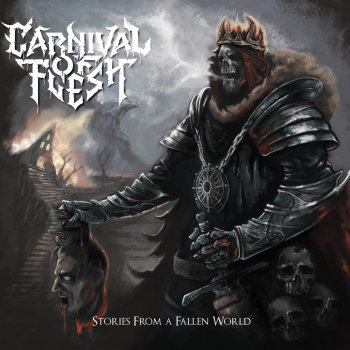 The night devoured the morning, the fires burnt the ground A worthy foe on the battlefield was nowhere to be found Armies fell and rose again, to serve them on their side

They march on with audacity that cannot be denied Onto the last victory, they′re ready for the game The closing play in this theatre of pain The curtain shall come down when the last kingdom's controlled By eternal darkness, as the prophecy foretold The last battalion of the fair Quavering in despair Their champion arose "We must take no remorse ...in our own death" They′re flying high, observing puppets on the stage Every scene filling them with bitterness and rage Putting all resources into the final fight Vast armies stretch beyond the line of sight The air is getting thick from the grizzling sounds Of weapons slicing flesh and bodies hitting ground Past the point of no return, the oath has been sworn A new sea of blood is bound here to be formed Have no fear, pain is here Fire! Fire! Liberating, everlasting, mesmerising flame Fire! The flames grow higher The soul-consuming. dominating messenger of pain Fire! Fire! Consumes the flesh, reduces to ash, all that's in its way Fire! Sings like a choir There's no escape from melodies of abysmal dismay On the other side, in the haunting dark The Eternal Queen was ready to strike Casting spells of unspeakable woe Each one more deadly as her power grows A courageous guild started a coup They ambushed the Queen with a magical cloud Blinded by rage she let her guard down With all their strength they vigorously fought For hours on end, until she was caught They dragged her far away from here, never to be found She was put on a torture wheel, head facing the ground For every fallen ally they threw a sack of stones The ambiance was filled with the sound of her cracking bones They hacked her into pieces, cut every vein She couldn′t die but she felt excruciating pain As the final step they set her body alight Her immortal soul was crushed with this gruesome sight Comatose From pain receptors′ overdose She couldn't move or breathe Her soul collapsed She couldn′t stand it any more And once again She was dead Her soul began the journey towards the sky Leaving her torturers petrified Impervious darkness covers the plains No light will there ever shine again The Flaming Crown felt a part of him die Absurdly still hoping that she's alive Riding swiftly towards the cursed site This fate he will not recognise Approached The place where once she stood But all that was left Was burnt flesh Devoured by emotions, his madness reached new heights Cathartically killing everything in sight The gateway from the afterlife was permanently closed No undead soldiers evermore arose Enemies and allies were all wiped alike Abidingly put down by his fatal strike Over his own actions he lost all control For where was his soul is now a massive hole He won′t stop until they're all dead If he could, he would cut his own head All the world united to try to take him down But they failed to even touch his crown How can you kill that which will not die To whom the comfort of death is denied? How do you crush that which has no soul That lost its purpose and ultimate goal? Waves of soldiers met their gruesome end Some even by their own hand They embrace their deaths as a welcome release From this living hell stripped off any sort of peace Now they′re all dead The sea is full of lead Sitting on the edge of a bloody shore Of his sanity he slowly regains control All around him are fields of corpses In his mind he still hears their voices Outcome of this battle, the final score He lost all he was working for After a deep thought, to him it occurred He is now the ruler of (an) empty world

Stories from a Fallen World