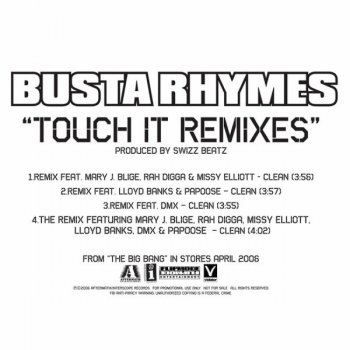 No translations available
+Add Translation
We detected some issues
Mike Ely suggested changes to these lyrics.

Touch it, bring it, pay it, watch it Turn it, leave it, stop, format it See, now you know who the God be Back runnin' the city and you know who the squad be Flipmode, bitch, look see ain't nothin' changed Now I'm back with the remix with the Queens of the game (TURN IT UP!!) When you see me in the spot, you niggas better respect it Y'all already know where I rep, ain't no reason to check it And I know that you ain't fuckin' with me, just for the record So instead, I'mma let Mary J. Blige come and set it Maybe you can guess who it is (Uh huh) Mary J. Blige, I'm 'bout to handle my biz (Uh huh) I'm on my grown woman, still I rep for the kids In every hood, and all my peoples doin' a bid (TURN IT UP!!) Now you know who's really the queen, deliver the mail Seven hundred thirty thousand, first week of my sales The haters plot and they watch, lookin' all pale While I'm on a yacht, overseas, doin' my nails Now he sittin' there lookin' stuck He thinkin' cause he spent a little dough I'm 'gon fuck If money ain't a thing, I'm sayin' let a bitch know Type to empty an account, how far you willin' to go (TURN IT UP!!) Now he hopin' on the jet, he ain't wastin' no time Told me all expense paid anyplace I could find Hit the islands in the winter, trickin' all on his dime Ain't a shorty in the world pussy better than mine, they wanna Touch it, bring it, pay it, watch it Turn it, leave it, stop, format it I'm jinglin' baby, go 'head mami Don't I look charmin', put your lips up on me Kiss it, touch it, good, yes I wish you would (TURN IT UP!!) You like to see me when I dip, baby, dip Don't it look like I got Beyonce's hips Lookin' like I could be like Nia Long Boy, you smokin' that Cheech and Chong I know it feels like I been gone for a minute But I'm back, chinchilla ice on with a fitted Everybody talk money, everybody gonna run With that bowl of bread smaller than the arm of a midget (TURN IT UP!!) And you know I'm doin' my thing, it's blue in the ring If you had it like this, you probably do it the same But you won't, cause you broke, all you do is complain After the club, I'mma put a few in the range and let 'em Touch it, bring it, pay it, watch it Turn it, leave it, stop, format it Five boroughs of death, you don't understand I got New York City in the palm of my hand Now I could make a tight fist and let it crumble ridiculous Or I could smack the world with a New York Nemesis (TURN IT UP!!) I got Staten Island on my pinky, Queens on my thumb, dude The Bronx on my middle finger screamin' fuck you Rock ice in Manhattan so there's the ring finger You know I had to keep Brooklyn on the trigger finger Swizz is the monster, X is the beast Fuckin' with Bus, everyday is a feast Stay off the streets, I'm tired of talkin to y'all niggas I'm a stick a fork in y'all niggas (TURN IT UP!!) When I hit 'em man, that truck come get 'em man Fucked up how I did 'em man Ain't no remorse for the corpse, truth is Can't I.D. the body, nigga toothless Touch it, bring it, pay it, watch it Turn it, leave it, stop, format it You see me, you love me, the streets declare me God of the hood You niggas is watchin' and wishin' you could Be claimin' the throne the way I got it, lock it mu'fuckers What's good, you tryin' to stop it, I'm wishin' you would (TURN IT UP!!) Cause then I'm glad to hit you with the fact that the God is immortal as spit The way I be doin' historical shit In case you and your niggas act like you ain't know when I'm informin' your click I take your bitch while I'm performin' my shit Touch it, bring it, pay it, watch it Turn it, leave it, stop, format it