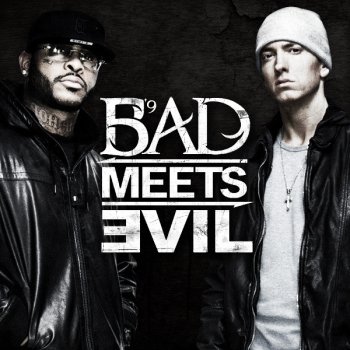 Yo yo, it's several different levels to pickin up shovels And dumpin you in ditches under sea level Frontin you when I'm wit this Let meeshin you niggaz til you my position in this Beef! - Leavin you under Venice, opposition finished! There it is, we invaded created a Pyramid - Of a Haven of names, so blame Dre, and that ear of his So {*heavy breathing*} breathe, I'd rather REACH for your neck And I never HEAT you for respect, unless you GREET me wit less I got a skunk, in my trunk I'm lyin, I got a pump in my trunk Your dyin, how many lumps niggaz want? Who's ready for y'all? We ready for y'all We too incredibly raw, for any artist that said he would draw I stand firm, and it hurts to live it You open that can of worms, I hope you ready for the dirt that's wit it Slap a hoe, snatch a mic! Bein brought to y'all in black and in white (IT'S the NEW!) Joe Jackson and Ike, we renegades Since I'm in a position to talk to these kids and they listen I ain't no politician but I'll kick it with 'em a minute Cause see they call me a menace; and if the shoe fits I'll wear it But if it don't, then y'all'll swallow the truth grin and bear it Now who's these king of these rude ludicrous lucrative lyrics Who could inherit the title, put the youth in hysterics Usin his music to steer it, sharin his views and his merits But there's a huge interference - they're sayin you shouldn't hear it Maybe it's hatred I spew, maybe it's food for the spirit Maybe it's beautiful music I made for you to just cherish But I'm debated disputed hated and viewed in America As a motherfuckin drug addict - like you didn't experiment? Now now, that's when you start to stare at who's in the mirror And see yourself as a kid again, and you get embarrased And I got nothin to do but make you look stupid as parents You fuckin do-gooders - too bad you couldn't do good at marriage! (Ha ha!) And do you have any clue what I had to do to get here I don't Think you do so stay tuned and keep your ears glued to the stereo Cause here we go - he's Royce, he's the King Of Detroit And I'm the sinister, Mr. Kiss-My-Ass it's just the RENEGADE! Never been afraid to say What's on my mind at, any given time of day Cause I'm a RENEGADE! Never been afraid to talk About anything (ANYTHING) anything (ANYTHING), RENEGADE! RENEGADE! Never been afraid to say What's on my mind at, any given time of day Cause I'm a RENEGADE! Never been afraid to talk About anything (ANYTHING) anything (ANYTHING) I determine what time it's on, I call my nigga Proof Hand him a pint of Limon and turn him loose! I'm tired of you new jacks I'm tired of niggaz that's like - "I'm bout to blow!" Unless you a bitch, we dont care if you bout do that Move back, youngster, the glock on speak Chew up your vest and turn your chest hair to taco meat! The street, continuous to pit, quick to smash ya Or flash the clip, or give you the picture (developin) Click clock, six shots blows through another door And it gets hot, Hip Hop portable tug of war Who did ya niggaz beats you bitches, who made it work? Dat shit was *phwrt!*, I got harder 2-Way alerts Just when I thought my dogg couldn't get any meaner You talk about his daughter, you probably gettin the heater You talk about his momma, he won't even give ya the finger (He's crazy!) Deranged!, not media eaters, we renegades See I'm a poet to some, a regular modern day Shakespeare Jesus Christ the King of these Latter Day Saints here To shatter the picture in which of that as they paint me As a monger of hate and Satan a scatter-brained atheist But that ain't the case, see it's a matter of taste We as a people decide if Shady's as bad as they say he is Or is he the latter - a gateway to escape? Media scapegoat, who they can be mad at today See it's easy as cake, simple as whistlin Dixie While I'm wavin the pistol at sixty Christians against me Go to war with the Mormons, take a bath with the Catholics In holy water - no wonder they try to hold me under longer I'm a motherfuckin spiteful, DELIGHTFUL eyeful The new Ice Cube - motherfuckers HATE to like you What did I do? (huh?) I'm just a kid from the gutter Makin this butter off these bloodsuckers, cause I'm a muh'fuckin