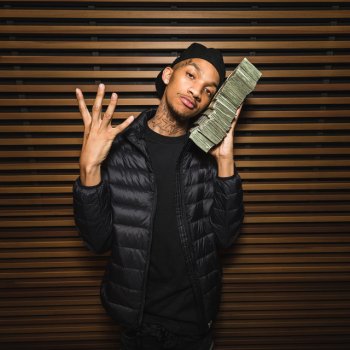 Ron on the beat, he chopped it Four times, four times Four way, you get this shit to go away

Stupid That lil' nigga Khalick, he popping (Uh huh) Watch your freak, she eat, gimme noggin (Thot-thot) I took off in no time He better not play with big four times 'Cause he say it's beef, we squash it (Come here) Lil' nigga, you broke, go see a doctor (Get him outta here) Glock need to gimme a sponsor (Uh) I turned up, went harder and harder 'Cause I seen it and I won't go back to the bottom (Turn up) I'm finna sign a deal (Uh) And buy a crib for my mama (Yes, sir) All of my lil' niggas choppers (On gang) I'm spending your salary in the mall when I'm shopping (Racks) Knew I was the shit as a toddler Glock on my hip at the office (Pop, pop) BDB, we ain't giving no offers These bitch niggas mad, They probably wanna off us (Uh, damn) He probably won't kill me (Yeah) Not as nasty, I did 'em filthy (Bitch) I need a ten or better, I'm picky (Ten) Hundred racks for a show, you want me in your city (Cash) Ron on the beat, he chopped it (Uh) I came in the booth and killed it (Killed it) Body bag, zip it (Murder) These bitches pulling on my pants, fuckin' up my zipper (Ooh) Baby told me you a winner (Uh) I came in the GOAT a beginner Ooh, that lil' nigga colder than winter These bitch niggas rats like Master Splinter (Pussy) I just got a paper cut thumbing through them racks Went and got straps on my sack, got busy I won't diss, y'all whack that nigga (Come here) I ain't savin' hoes, I ain't no action figure (No) I'm big four times (Four times), uh-huh I'm a billion dollar nigga (Cash) More money, more problems, nigga I never been stupid, I'm a solve it nigga (Fuck) That lil' nigga four times Stunna 4 Vegas the rawest, nigga (On gang) Hide your daughters, nigga (Huh?) Big four times bigger than The Carter, nigga (Haa) I put my city on my back (Uh) I put some titties in my strap (Uh) I paint her face, no MAC (Uh) My niggas' gon' go I say attack (Uh, uh) She wanna fuck (Uh-huh) She say I'm flashin' in racks (Come here) He wanna smoke, let's match Better come with an army I'm running a pack (Pussy) We having straps You would've thought I bought these shits from Iraq With equipment attached Watch your bitch when I'm beating the back (Ooh) Who you know come in the game and turn up this crazy? Keep it a stack Oh, nobody like Stunna 4 Vegas (Ha-ha) Fuck it, Frank, we gon' leave it like that Yeah, it's big four times, stupid