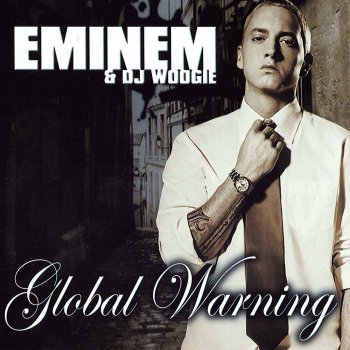 It's my right to insist That he acknowledge my existence But he just displays complete lack of respect That's what he says to himself As he uses magazines to trash me As he sits with both feet up at his desk Smokes a bag of his weed And starts imagining things And he just can't see that he's manically depressed And in his jealousy and envy It just whirls him in a frenzy As he turns on MTV and sees my face He don't exist in this world So he just twists and he twirls Spirals and spins till he hurls himself into rage And it's destroying him slowly Cause he does not even know me Even though he sees me everywhere he goes So he just tortures himself He has no fortune and wealth So he extorts someone else to get his dough And now he's acting like a bully So he tries to push and pull me But he knows that he can't fool me so he's mad He has no choice but to scream And raise his voice up at me Cause it annoys him to see that I ain't scared You ain't no motherfucking (bully) And I ain't bowing to no motherfucking (bully) I won't allow it, ain't gonna coward to no (bully) I'll be damned if I don't stand up to a (bully) Fight like a man and throw my hands up to a (bully...) And I know it must be fucking with you emotionall(y...) Now I'm not trying to make no more enemies No more unfortunately There's so many other motherfuckers that just are They just keep pounding at me Now that I'm down with 50 Suddenly now I got beef with this faggot Ja' But his ass is such a puppet Irv could shove his whole hand up it And just make him say what he wants him to say But Suge has Irv's on a string And Irv's so nervous that he Says anything to this man to keep him at bay So now Ja thinks that he's so tough And Murder Inc.'s the big bad wolf And they go huff and puff and blow our label down But our building's made out of bricks So you ain't taking out shit And dawg you just did a song with Bobby Brown So now you try to pull a race card And it backfires in your face hard Cause you know we don't play that black and white shit Plus this stylist that you fucked When you was ecstasied up Was just a man who's dressed up as a white bitch Now what bothers me the most About hip-hop is we so close To picking up where we left off with Big and Pac We just lost Jam Master J Big L got blasted away Plus we lost Bugs, Slang Toungue, and Freaky Ta It's like a never-ending cycle That just seems to come full circle Everybody's gotta be so fucking hard I'm not excluding myself Cause I been stupid as well I been known to lose it when someone says something smart But as we grow as men We learn to let shit go, but then again There's only so much bullshit we can really stand We all got reps to uphold When someone steps on our toes It's no exception, it goes for every man But if Irv really gave a fuck About Ja like he claims he does He'd wake him up and make his boy get off them drugs But he just keeps feeding him pills So if that E doesn't kill him Someone from G-Unit will and I ain't buzzed Dawg, I'm talking to you straight If the situation escalates Any worse, we're gonna lose another soldier to this game And if I get killed for this rap I got a million in cash That says I will get you back in Halie's name Irvine, get your boy off that (E...) Get at me, dawg Holla