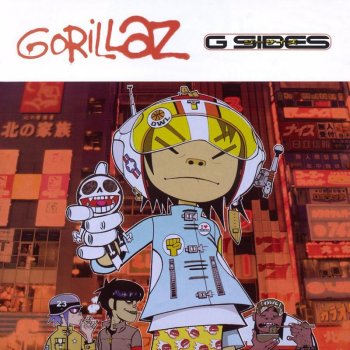 1 Traduzioni disponibili
Aggiungi traduzione
spagnolo
Scegli la traduzione
These lyrics are waiting for review
If you found mistakes, please help us by correcting them.

You couldn't escape this music even if your name's Houdini Our tracks say Life, Phi Life and don't disappear like a genie Communicating through your airwaves like a giant C.B.

Cos this one's for your radios or whether you receive me Our music is so hot it feels like the sun in Tahiti We wickedy-wock Gorillaz style is buck wild believe me We're heavy weights who phase ya, like Ali did with Frasier We spit the most flavour, and musically we'll amaze you We've been blessed and we've been gifted, by Jesus in his manger Won't you shout halleluiah, here comes the music saviour From your heart to your mind, your spirits to your souls We've come to take control, with the Gorillaz on patrol See our rhymes possess the powers of a super hero Supernaturally we rock the mic but with a natural flow If you didn't know before, you know now we told you so Gorillaz rock it on just like the one in Tokyo Chorus... Cos we're making this music that's making you lose it So people don't abuse it, and there ain't no way for you to refuse it Gorillaz be the army that's starting this party hard Making more noise than carnivals mixed with the Mardi-Gradi We're coming through your town with this sound that's so profound Gorillaz with the rappers that straight from the underground We're tearing it down, making you feel this sort of force Knocking it into your senses and knocking you off your course Cos we're the source, got your feeling that's so appealing We got you jumping around and bouncing off of the ceiling Making music and feeling from Baltimore into Bristol I know you're hearing me cos my voice is clearer than crystal The casual supernatural flows I be exposing Making s